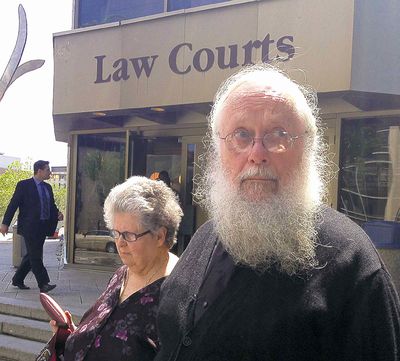 A disgraced former archbishop at the centre of a sexual assault trial began serving his sentence, turning himself in after the Manitoba Court of Appeal dismissed his appeal this morning.

Seraphim Storheim was to spend at least several hours at the Remand Centre before being transferred to Headlingley Correctional Centre to begin serving an eight month sentence, his lawyer said.

“We lost. The appeals were all dismissed. The fresh evidence motion was dismissed; the conviction appeal was dismissed and the leave to appeal sentence was refused. So basically he began serving his sentence this morning,” Storheim’s lawyer Jeffrey J. Gindin, Q.C. said today by phone.

Storheim was convicted of sexual assault in January 2014 and sentenced to eight months in jail for an assault dating back almost 30 years. He spent just over week a behind bars before being freed on bail in July 2014 pending his appeal.

That appeal was put before the court in October 2014.

Burnett, in a 29-page decision, said Storheim “has not demonstrated that the sentence was demonstrably unfit or clearly unreasonable or that it was arrived at as a result of an error in principle.

“As the sentence appeal has no realistic chance of success, leave to appeal is denied.”

As well, Burnett dismissed the appeal because the lower court judge’s credibility assessment was correct when he said “he did not believe the accused and was not left in reasonable doubt by the accused’s testimony.”

The sexual assault occurred when an Ontario boy came to visit the priest in Winnipeg in 1985 to further his religious education. Storheim was the parish priest at Holy Trinity Sobor Orthodox Church on Manitoba Avenue at the time of the alleged incidents.

Storheim denied any wrongdoing, testifying that he only talked to the boy about puberty and inspected his pyjama bottoms for semen at the boy’s request.

Storheim had been the most senior cleric of his church in Canada when the charges were laid in the fall of 2011, holding the title of Archbishop of Ottawa and Canada, but was subsequently suspended from that post pending the outcome of the criminal charges and an internal church investigation.